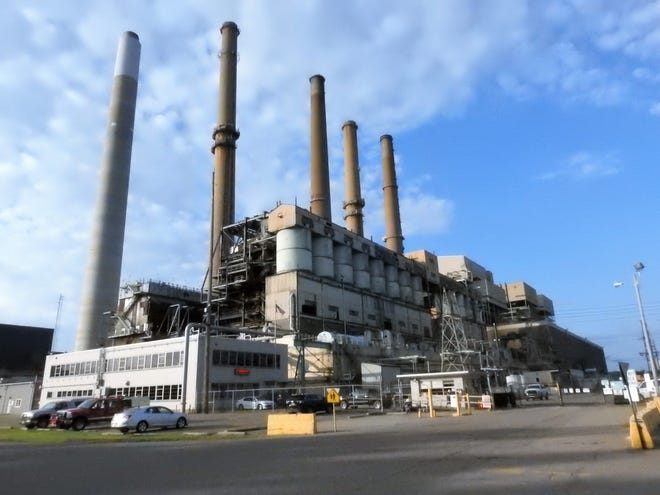 CONESVILLE – From the shuttered American Electric Power Plant is rising Conesville Industrial Park, an opportunity to bring new business into the area from a well-respected developer.

The coal-fired plant founded in 1957 closed on May 31. The decision to close the plant was based on costs to keep the plant operating and the outcomes of competitive generation auctions in 2018. The Frontier Group of Companies, whose core business is Frontier Industrial Corp., took over about 2,500 acres on June 5, including the main buildings. Prep work has been going on over the past seven months.

Demolition of structures and remediation of the land will take about seven years. Frontier looks to hire approximately 90 people for various onsite work in that time with most coming from the local area. This includes operators, laborers and environmental technicians. The AEP landfill on Ohio 83 will also be filled and then monitored for 30 years.

Officials with Frontier said a huge industrial plant, like a vehicle producer, isn’t likely. However, a few smaller manufacturers could be interested in the area. There are plans for a 50-megawatt solar array that could be enticing to some companies.

Frontier recently held a community outreach meeting where it met with officials from Conesville and Coshocton County. Those in attendance were satisfied with the plan and feel it will be great for the village and county.

Tiffany Swigert, executive director of the Coshocton Port Authority, said Frontier came highly recommended by many of the agencies, like JobsOhio, that she works with across the state. Swigert plans to work closely with Frontier and has already talked with them on supporting the Columbus to Pittsburgh corridor on Ohio 16. The widening from two lanes to four lanes of traffic is predicted to be a major boon and another enticement to bring in new business. 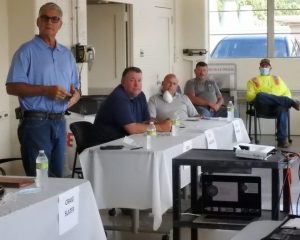 Frontier Industrial Corp. was founded in 2001, but its roots go back to the 1990s in the Buffalo, New York, area. Frontier has its hands in many different fields from other industrial parks similar to what will go into Conesville to apartment complexes and even a comedy club.

However, it’s primary focus is on being an industrial contractor and brownfield developer that decommissions, demolishes and re-purposes aging and distressed industrial facilities.

“It tells you a lot, large companies like (AEP), are not going to just sell to anybody when they’re selling properties. They want to sell it to a good custodian that is going to do it the right way, a safe way, and certainly try to redevelop it. There are few that can do that and it gives us a competitive advantage,” Slater said. “We come not just with the environmental and demolition experience, but the redevelopment experience.”

They’ve done work across the U.S. and into Canada and South America. They look for sites with rail, river and road access, available utilities; and other elements that would attract a new user. They try to make locations shovel ready for any company that might come along. 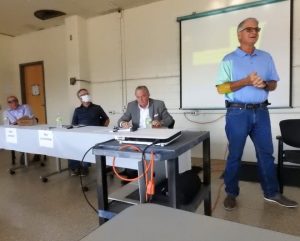 A major success story for Frontier is a former steel plant in Mingo Junction acquired in 2012. It was 300 acres with a live steel plant. Many buildings were knocked down, but the steel facilities were retained and a new steelmaker was brought in. While the COVID-19 pandemic has led to layoffs, the plant had about 200 workers earlier this year, Slater said.

“It’s a great story for us and we really want to recreate that in some of our other acquisitions,” he said.

Frontier’s largest site is the Weirton Industrial Park in Weirton, West Virginia. It’s about 2,000 acres bought for $30 million and Frontier has invested about $200 million for reuse. Slater said four months after purchase, they brought the first international investment into West Virginia in about 20 years, a compressor manufacturer from Canada with 110 jobs.

“We applied the same principal and strategies we’ve had in other facilities. We knocked down the stuff that could not be reused. We kept what we thought somebody might want to use. We improved the rail and barge facilities there,” Slater said. “In a lot of cases, like with Weirton and as we would here, I think, we wait for opportunity. We try to prepare the property for someone we don’t know who may come.” 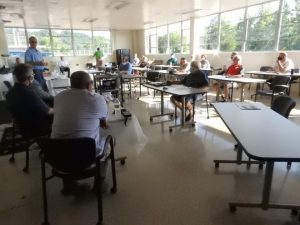 The game plan for Conesville

Frontier is currently in the project permitting phase for the Conesville Industrial Park. Offices were setup, utilities were switched over to Frontier and other preliminary work has been done. A power substation on site and connected transmission lines will still be owned and operated by AEP. They have also retained some other land.

Coal combustion residuals, or coal ash, will be cleaned up from a pond at the entrance to the former plant. Pete Hartung, senior project manager, said there is close to 9 million yards of ash in the pond.

The material will be taken out of the pond, dried and put in the AEP landfill at the end of a haul road off of Ohio 83. The landfill has about 3.5 million yards of space. Once filled, it will be capped and then monitored for 30 years, Hartung said. The leftover ash will be part of a beneficial reuse program piloted through Ohio State University for closure of abandoned mine lands.

The generating stations will be demolished. Several out buildings will be retained. The six stacks, which can be seen from miles away, will be taken down. Hartung said they are deciding on the method, but implosion is possible.

AEP removed all hazardous waste, Hartung said, but they are working on other cleanup and asbestos abatement prior to demolitions. Utilities would also be disconnected to those buildings. The coal yard and a holding pond will be cleaned out too. All cleanup will adhere to specific federal, state and local guidelines.

“This site will always be known as the old AEP plant and they want to make sure their name is carried on properly,” Hartung said.

Hartung said Frontier has its own equipment it uses. Steel will be recycled. Once structures are down, the elevated concrete structures will be brought down to grade. Demolition will be 3.5 to four years and cleanup of ash will be five to six years. Hartung said all field work should be done in approximately seven years.

“At the end of the job, you will see a concrete pad out there,” Hartung said. “You’ll have a flat site. When we bring someone in to redevelop, it’s attractive to them.”

Chief Executive Officer David Franjoine said once the site is ready they would be reaching out to various agencies and Frontier’s developed base of clients for possible new tenants. These would be ones that could reuse buildings or build new on available land.

A solar field providing 50 megawatts of energy will be placed on land that has little other options for reuse. This green energy would be available to any companies who move onto the site.

“We hope solar will be a catalyst to make people want to come to the site and be part of reusable energy,” Franjoine said. “We’ve found in other areas, it is an attractive type of energy to offer a company.”

Franjoine said they don’t often hit a “home run” like they did in Mingo Junction, but they are always hopeful of finding companies that fit well for the given area. He said Conesville isn’t on a major highway, which could be a stumbling block, but he’s confident they can make a go with hard work and community support. The fact that local government and agencies are very driven to bring in new jobs and could offer incentives to companies, like tax breaks, is an asset.

“For us to be successful here, we’re going to have to work hard to bring a tenant on this site or multiple tenants to the property. We hope the community will help us do that also with whatever support we can get,” Franjoine said.